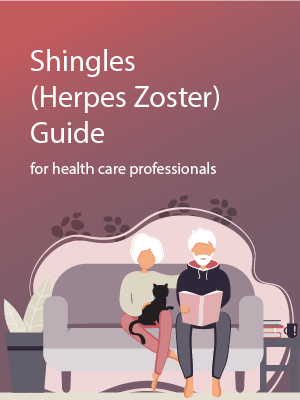 Shingles (Herpes Zoster) occurs most commonly in older age groups, and can cause severe pain. It is a reactivation of the virus which causes chickenpox (varicella-zoster virus VZV). After developing chickenpox, the virus lies dormant in the dorsal root or trigeminal ganglia and can become reactivated later in life to cause shingles.

The Shingles – A Guide for Health Professionals provides useful information about clinical features of the disease, as well as information on transmission, complications, and vaccination recommendations.

As a health professional you play an active role in protecting thousands of older Australians who are at a higher risk of shingles and its complications as well as providing treatment during a zoster infection.

Advise patients about the importance and safety of vaccination, obtain medical history prior to vaccination with zoster vaccine, and check contraindications of live zoster vaccine in immunocompromised individuals.

Be on the lookout for diagnosis, and provide early management of pain and antiviral treatment when indicated.

Reactivation of the virus which causes chickenpox (varicella-zoster virus VZV) in a person who has previously had varicella (chickenpox).

After developing chickenpox, the virus lies dormant in the dorsal root or trigeminal ganglia and can become reactivated later in life to cause shingles. [1][2]

Generally, shingles presents as an acute, self-limiting vesicular rash which is often painful and lasts around 10–15 days.

The rash is usually unilateral, most commonly affecting the lumbar or thoracic dermatomes. The virus works down the nerves that branch out from the spinal cord.

In 80% of cases, early phase occurs 2–3 days before the rash.[3] Early symptoms may be severe pain (e.g. ‘burning’, ‘stabbing’), itching and numbness around the affected areas. This may be accompanied by headache, photophobia and malaise.

Severe pain (where the rash was) known as post-herpetic neuralgia (PHN):

Shingles cannot be passed from one person to another. However, a person with shingles can pass the varicella zoster virus to a person who has never had chickenpox or who has not had the chickenpox vaccine. In such cases, the person exposed to the virus may develop chickenpox but not shingles.[6]

The virus is spread by direct contact with the fluid contained in the blisters, which can transfer to sheets and clothing.

Until the blisters scab over, the person is infectious. Counsel patients to avoid contact with people who have a weakened immune system, newborns and pregnant women while contagious.

Shingles is less contagious than chickenpox and the risk of a person with shingles spreading the virus is low if the rash is covered.

Who is at Risk

In a national serosurvey conducted in 2007, more than 95% of the adult population in Australia had antibodies to VZV by the age 30, indicating that they had been previously infected with the virus.[7] Therefore almost the entire adult population is at risk of shingles.

Overall, 20–30% of people will develop shingles in their lifetime, most after the age of 50 years. People who are immunocompromised are also at risk.[8]

Preventing herpes zoster is the best way to avoid post-herpetic neuralgia and other complications.

There are two vaccines available for people aged 50 years and older, to prevent herpes zoster:

SHINGRIX (powder and suspension for injection) is now also indicated for the prevention of herpes zoster (HZ) and post-herpetic neuralgia use in adults 18 years of age or older at increased risk of HZ.[11]

Which vaccine should be used?

Shingrix is preferred over Zostavax for people aged 50 years and over, for the prevention of herpes zoster and its complications due to its higher efficacy. Shingrix is now available in Australia under private prescription only. The manufacturer has not submitted it for supply on the NIP at this stage.

Zostavax remains an alternative to Shingrix for people who are immunocompetent. It is available on the NIP for all people at 70 years of age.

People who are immunocompromised

Zostavax (as with other live vaccines) is generally contraindicated in people who are immunocompromised. Shingrix is recommended in this population.

Who should be vaccinated with the zoster vaccine?

The Shingles Prevention Study (SPS) was conducted among 38,546 adults aged ≥ 60 years and showed that compared to placebo, vaccination with Zostavax reduced:

Zostavax is free for all adults aged 70 YEARS through the National Immunisation Program (NIP). A single catch up dose will be funded under the NIP for adults 71–79 years of age until 31 October 2023. People in this age group have a high likelihood of developing shingles and will develop PHN after shingles in 25% of the cases.

Vaccination with Zostavax of other age groups (e.g. those aged 50–69 or 80 years and over) is available on prescription and can be purchased by patients.

Who should not receive the live zoster vaccine?

Before vaccinating people with Zostavax

Obtain medical history prior to vaccination with Zostavax, check contraindications of Zostavax in immunocompromised individuals.

In persons who are or have recently been immunocompromised, the safety of administering Zostavax should always be considered on a case-by-case basis. If there is uncertainty around the level of immunocompromise and when vaccine administration may be safe, vaccination should be withheld and expert advice sought from the treating physician and/or an immunisation specialist.

UPDATE: Denosumab has been removed from the list of immunosuppressive medications contraindicated with Zostavax as there is currently not enough evidence to suggest it is a contraindication to Zostavax. [2][8]

Who should not receive Shingrix?

There is currently no data on the use of Shingrix in pregnant women (Category B2).

Antiviral treatment (famciclovir, valaciclovir or aciclovir#) may help to reduce pain and shorten the duration of shingles. The treatment is best taken within 72 hours of the onset of the rash but may still be helpful if taken after this time. These antiviral treatments are all considered safe with limited side effects (nausea, headache).

#There is evidence that famciclovir and valaciclovir are more effective than aciclovir in reducing acute pain and may be associated with greater patient compliance due to their more convenient dosing.

Zostavax contains live attenuated varicella-zoster virus. It is safe and well tolerated. Some people may experience a headache, fatigue or soreness around the site where the shot was given. The reaction is typically mild and resolves within a few days.

Can I give zoster vaccine on the same day as other vaccines?

Both Shingrix and Zostavax can be given with most inactivated or live vaccines (including any of the available pneumococcal vaccines) using separate injections and injection sites.

If Zostavax is not given on the same day as other live viral vaccines (e.g. MMR, yellow fever) separate administration by 4 weeks.[7]

It is acceptable to co-administer Shingrix and Fluad Quad on the same day if necessary. However, given the lack of co-administration data for these two adjuvanted vaccines, it is preferred to separate their administration by a few days, and ensure that any adverse events following immunisation with the first vaccine have resolved before administration of the other vaccine.[2]

Around 90% of Australians will get HPV at some point in their lives. Most HPV infections clear within a short time. HPV related cancers can take up to 10 years to develop....Read More

Be an advocate for vaccination. People are more likely to get the influenza vaccination if it is recommended by you, the GP....Read More

Find out how to protect your patients against meningococcal, a fast acting and potentially deadly disease....Read More

Pertussis is a highly contagious bacterial infection affecting the respiratory system, that can cause severe illness and death....Read More

A guide on how to best protect the mother and unborn child with vaccinations....Read More